Welcome to the opening of the exhibition on Wednesday 4th May from 5pm to 7pm!

We follow the current guidelines by Regional State Administrative Agencies to ensure a safe exhibition visit. 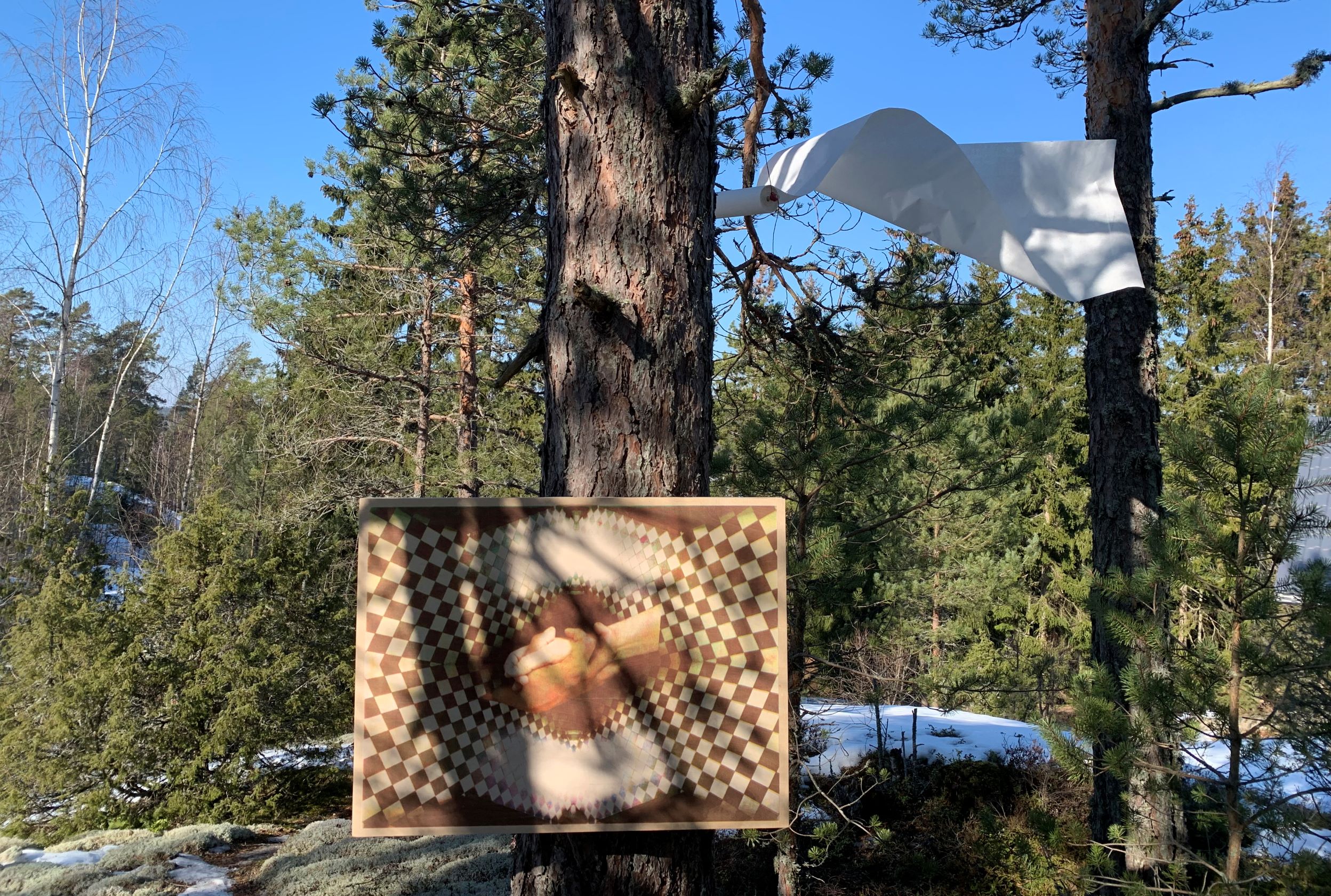 Stay and Stir – Halfway Curled Ribbons is artist Sirkku Ketola’s solo exhibition that has been planned to the Jetty Barracks gallery space in Suomenlinna Island in Helsinki. The first gallery hall is composed with A Body Called Paula, a performance series and an installation which transforms during the exhibition. This long project has become on it’s halfway turning point (2017–2027). The second hall is rhythmed with new smaller works, timeless compositions of love, serigraphy, wood, words and symbols.

A Body Called Paula, is an installation based on repetition and a meditative performance in which Ketola, taking the role of Paula, works on a large ornament on fragile paper. Paula is an allegory of a human as part of the universe and as a builder of technology. With the help of serigraphy, her hands and the space form a human printer, a sensual machine. Paula is enchanted with the ribbons, trapped in the activity and fettered by the body and matter. In Finnish the word paula is a synonym to a ribbon and a trap. The performance parts Light, Passion, Knowledge, Reality and Darkness symbolises the elements of full life. Tension is always present in the seemingly calm performance as the characteristics of the matter are in danger of being revealed when the fragile paper gets stuck. The ethereal soundscape of the performance has been created by Ketola.

A Body Called Paula, begun in 2017, is a ten-year long process. Every year three to four ornament ribbons are created in different parts of the world. The performance is physically demanding and the endurance of the artist’s hands determine the rhythm. The long timeline allows to override the control and lets the work itself find its essential form and dialogue. The task of the artist is only to maintain the movement.

A Body Called Paula performances in the gallery on weekends at 12.30 pm. You can freely browse the work just for a while, or you can stay with it even longer (duration approx. 2 hours / performance):

Sirkku Ketola (b. 1973) is a contemporary printmaker who combines serigraphy with different materials. She is a civilized savage who slows down the digital image stream through handicraft methods, trying to understand the relationship between human rhythm and matter. Ketola earned her Master of Fine Arts degree from the Finnish Academy of Fine Arts and she has taken part in numerous Finnish and international projects and exhibitions. She lives and works in Turku and occasionally in Brussels. The artist’s work has been supported by the Arts Promotion Centre Finland and A Body Called Paula project by the Arts Promotion Centre Finland and The Finnish Cultural Foundation.